I want a Smieee! 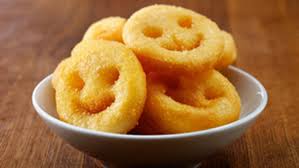 It was one of our favorite snacks to be offered to the guests. We always had a packet or two of McCain snacks in the fridge. It was a saver in many ways. If there was absolutely nothing to eat, we would just open the packet and fry them. Easy peasy! Among the McCain snacks, the smile-shaped potato fries, especially, were a permanent resident of our freezer. It held a lot of meaning for us. For one, the arrival of guests would be a matter of great excitement. Because we knew that guests meant we would get to partake of the evening repast, somehow or the other. Among the things offered to the guests, McCain’s foodstuffs were my mom’s favorites. We would have a separate plate of it in the kitchen, which we would pounce on, once the guests left. It was not just us, you see.
My niece, who used to be a dear little thing then, had her eyes fixed on those smile-shaped McCain snacks. We called them ‘smileys’. When we ate them, she would immediately and frantically start gesturing to us, indicating that she loved the food item. We would show her the smileys and she would cackle and clap in glee, shouting 'smieee'. That was her way of uttering ‘smiley’. Her cute lisp would make us go gaga over her. When we extended the snack towards her, she would happily nibble at it. It was one of the few things that she loved to eat. It was more titillating and better tasting than the bland foods that she had to eat. She would trace the smiley with her little fingers, wiggling them inside the eye-shaped holes and then moving them back and forth between the smile-shaped cavity, her eyes aglow with wonder, and her curious self exploring the various novelties of things. The smiley always managed to bring a smile to her face. Kids have all sorts of preferences, some are excessively fond of chocolates, some like chips while some have a penchant for soft drinks. But my niece had her heart set on the smileys.

Whenever she seemed to be in a sour mood, we would say, 'Want a smieee?' And her attention would instantly be riveted to us. She would be diverted enough for us to employ other methods to get her back to normal. This was one of our pet ways of making her feel better.
There were times when she wouldn't eat a thing. She would throw tantrums of proportions unheard of. During those difficult times, only one thing came to the rescue. Our dear smileys. She would gulp them down easily, making life easier for my aunt. Even when she grew up, we used to ask her so- 'Do you want a smieee?' For many years she would be calling them ‘smieees’ instead of smileys. It was our own secret way of making her smile. It became an integral part of her childhood. Her own ‘smieee’, it taught her to smile. 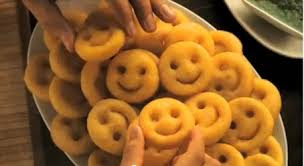 To discover more delicacies of the sort and sample more such magical tastes, go to http://www.mccainindia.com/

~This post was written as a part of the 'Let's put a smile on that face!' activity by McCain in association with IndiBlogger~

Posted by Aashisha Chakraborty at 11:55

Bin them or ban them

With a life of their own

Grow till you notice them

And wonder what you got

They make one human